The candidate filing period is Dec. 15-22, 2014. About 700 candidates from 145 suburban Cook County elementary, high school and unit school districts are expected to file paperwork to get on the ballot.

The Clerk's downtown office, as well as the election warehouse on the western Chicago border with Cicero, will be open the entirety of the filing period. In addition, candidate filing will be conducted at two suburban locations on the first day of filing, when most candidates historically have filed.

All candidates who are in line by 8 a.m. on Dec. 15 will have their papers stamped with that time. If more than one candidate seeking the same office files at 8 a.m., a lottery will be conducted to determine whose name will appear first on the ballot. Candidates for the same office who file between 4 and 5 p.m. on Dec. 22, the last day of filing, will also be included in a ballot lottery for the last spot on the ballot. Anyone who files between 8:01 a.m. on Dec. 15 and 3:59 p.m. on Dec. 22 will be on the ballot in the order they turned in their nomination paperwork.

The locations, dates and times are as follows: 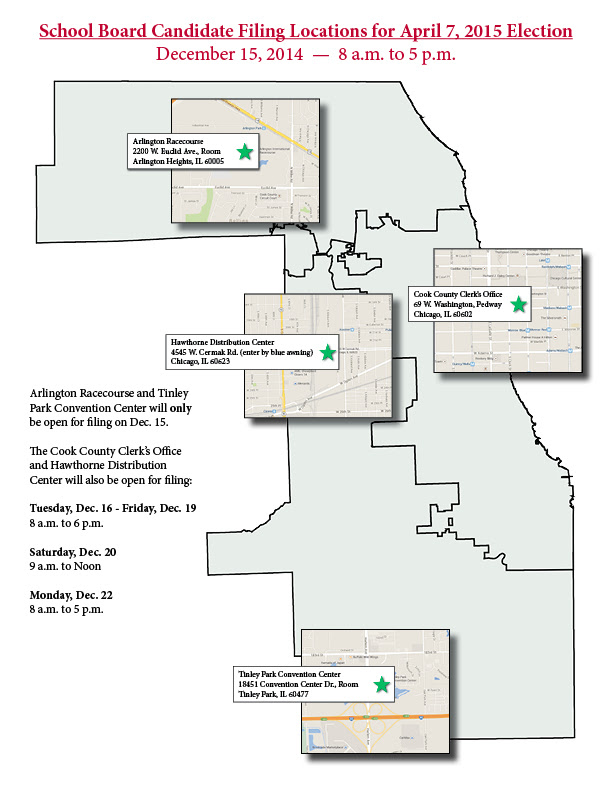 Information about how to file to be a school board candidate can be found atcookcountyclerk.com/schoolcandidates. Candidates should review the fact sheet, packet details and signature requirements.

The transfer of filing responsibility from school districts to all Illinois election authorities – not just Cook County – was included in HB 105, an election omnibus bill signed into law on July 1, 2014. Since the filing period often overlaps with school districts' winter break, as it does this year, many school districts did not wish to stay open solely for filing.

The Clerk's office oversees candidate filing for even-year elections, including countywide elected officials and Cook County Board commissioners, but this will be the first time administering candidate filing for school board candidates. Candidates for other local jurisdictions, such as municipalities and park boards, will still file with the district in which they are seeking election.

Another new law transferred oversight of objections to school board candidates to the Cook County Officers' Electoral Board, which already hears objections to library, police, fire and sanitary district candidacies. The Electoral Board is chaired by the Clerk's designee and also includes representatives from the State's Attorney and Circuit Court Clerk.

Notice is hereby given of the availability of funding from a Village of Oak Park Business Assistance Loan Program using $300,000 in federal CARES Act Community Development Block Grant-Corona Virus funding. The program is focused on helping small Oak...

Yes. . we all want school back to normal. Parents want...

The article following this one in the Landmark...

See you on the other side of this easily-avoidable...

Some. perspective. Population of Riverside is about...

This is exactly what the Forest Preserve District is...

Can you get through to Com Ed? It'd be helpful to let...

On: Storm whips through area, cutting...