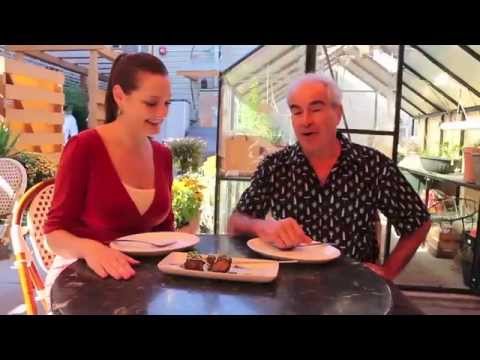 How: What is a pintxo? Executive Chef Dan Pancake calls it "Spanish food on a stick." The word pintxo is based on the Spanish word Pincho, meaning "to pierce." They are very popular in Spain, especially San Sebastian, and Chef Dan says "whenever I go, I never want to come back." His love for the Spanish convivial dining experience led him to create three varieties of Pintxo and one made with a favorite ingredient of his: pork.

What: This dish, like many on the menu, shows the influences of Chef Dan's travels. Although the pork belly is the star, the Chimichurri sauce gives the dish a balanced, full-bodied flavor. Made with vinegar, olive oil, parsley, garlic and a little chili flakes, Chef Dan has created an incredible combination that softens the richness of the pork belly. He gets the belly from pasture-raised pigs from the Netherlands. It all begins by crusting the pork belly in fennel seed, rosemary and other Mediterranean spices, smoking it in house, then leaving it to braise with fennel fronds for six hours. The next step is to chill it before being grilled over all hardwood charcoal, chosen because they burn hotter and cleaner than briquettes. The whole process can take up to a day and a half, but Chef Dan does it because "what makes food from the Mediterranean, and our food for that matter, so good is all of the prep that goes into it."

David Hammond, OakPark.com food blogger and four-time Baconfest Chicago judge, joined me on my visit to Autre Monde. Hear what he loved about the Pork Belly Pintxo by watching the video here. Did you know David Hammond has bee a judge at Baconfest Chicago for the last four years? Read about his experiences here.

BACON BIT: Why does Chef Dan salt the pork belly both before AND after grilling?
"Salt creates a chemical reaction in food." When you sprinkle salt on raw protein, a layer of moisture rises to the surface of the meat, which helps create that well-loved crust while sealing in the juices inside. With a protein like pork belly that has such a high fat content, some of the salt will melt away, which is why it is important to salt after cooking as well. Chef Dan finished his Pork Belly Pintxo with large, broad flaked crystals of Maldon Sea Salt from Great Britain because salt "opens up the taste buds," enhancing each meticulously placed flavor.

Get in on the bacon conversation and you could win $25*!

Plus, your answers could be published in an upcoming issue of Wednesday Journal!

What's your favorite local dish made with bacon or pork belly?

Give your answer in the comments section of this post, or any of the Bacon Quest posts on ONE of our sites:

One winner will be chosen at random for each of the three websites. Three winners selected total. Winners comments, and some others, will be published in an upcoming issue of our newspaper. Winners will be contacted at the email used to make the comment. Limit one entry per person. Please only answer on ONE of the three sites.

*Prize is a $25 gift certificate to Downtown Oak Park that can be used at over 75 businesses.

Does your restaurant have a bacon or pork belly dish you think could make the cut for Bacon Quest? Tell Alicia and she might consider stopping by on her next adventure!

The boys had a great meet a week later finishing 1st...

It's about time. The P & R department has always...

I think the apparent gross mishandling of this...

There are a lot of unanswered questions. Nothing has...

My husband was diagnosed of Parkinsons disease 2 years...

Why is the armored vehicle a big deal? Its not illegal...

Enjoy your retirement Ed! it is well deserved! Poppy...

On: Here's to a safe Halloween

As a resident of Lyons Township High School District...

On: LTHS superintendent to retire at...