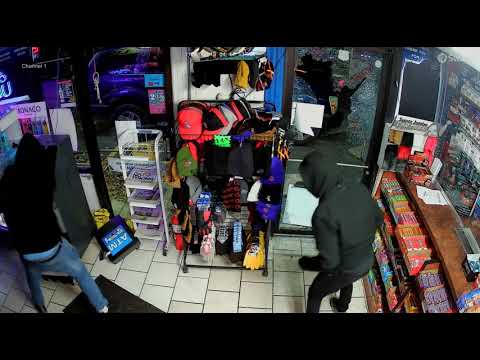 A burglary crew was able to pry the top off of the ATM inside a Riverside gas station minimart on Nov. 28, but the machine had no money in it at the time. (Courtesy of the Riverside Police Department)

A burglary crew was able to pry the top off of the ATM inside a Riverside gas station minimart on Nov. 28, but the machine had no money in it at the time. (Courtesy of the Riverside Police Department)

A burglary crew was able to pry the top off of the ATM inside a Riverside gas station minimart on Nov. 28, but the machine had no money in it at the time. (Courtesy of the Riverside Police Department)
< >
< >

The owner of the Citgo gas station at the corner of Harlem Avenue and Longcommon Road in Riverside has asked police to step up their patrols in the area after a crew of smash-and-grab burglars targeted the business for the third time within a month in their efforts to steal the minimart's ATM.

On Nov. 28 about 4:50 a.m., just 10 minutes or so before the business was scheduled to open, they struck again, smashing in the glass front door and prying off the top of the ATM, which was bolted to the floor, before making their getaway in a blue Dodge Durango with no license plates.

Riverside police reported responding to the gas station in two minutes, but the offenders were already gone. Surveillance video showed at least two offenders, both wearing masks and gloves, inside the business.

The vehicle was last seen driving away northbound on Harlem Avenue, but later that day, police reported finding the stolen top of the ATM on the parkway in the 100 block of Herrick Road.

"How they got all the way to Herrick Road, we don't know," said Police Chief Thomas Weitzel, who noted the piece of equipment was being processed for fingerprint evidence. "Detectives are canvassing the area house to house to see if anyone has a Ring doorbell video."

Pankaj "PK" Kapadia, one of the gas station's owners, said he hoped Riverside police could increase patrols near the gas station even more than the once-an-hour checks they've been making since the first incident on Nov. 2.

He purchased the business in April, expanded the hours of operation and spent tens of thousands of dollars to upgrade it, Kapadia said. The frequency of the burglary attempts and the expense associated with replacing glass and equipment has been wearing on him, he added.

In July, he experienced the first break-in when someone smashed the glass front door and stole liquor and cigarettes. In the early morning hours of Nov. 3 a crew of masked man smashed the door and made the first unsuccessful attempt to steal the ATM. Similar incidents took place on Nov. 13 and 28.

The ATM hasn't even been operational since Nov. 2, Kapadia said, and there's no money kept in the top part of the machine that was stolen. After the second incident, he taped a sign onto the front door, stating "No ATM service please," but the burglary crew made their third attempt anyway.

On Dec. 2, an ATM was sitting, sans top, outside of the business. There was no ATM inside.

"Four times is too many times," said Kapadia of the burglaries at the business since July. "I can't sleep at night. I wake up every hour to look at the [video feed from the security] cameras. I am scared.

"The cashiers, when they come in in the morning, are scared, too."

Kapadia said he thinks his business may be an attractive target since it's one of the few along Harlem Avenue that is not a 24-hour business. While he acknowledged that Riverside police have stepped up their patrols in the area, he'd like them to increase even more, at least in the short term.

"Maybe they could be patrolling every half an hour and stay here for like 10 minutes, because right now these have happened three times in like one, two weeks," Kapadia said. "At this moment we need some protection."

Weitzel said police in the suburbs and Chicago met recently to exchange information and try to establish patterns for the more than one dozen similar burglaries that have taken place since October.

Police believe all of the vehicles involved in the burglaries have been stolen and some have displayed license plates stolen from other vehicles. Weitzel said police believe more than one crew is involved, although they all appear to be using similar methods, wearing masks and gloves and using one person as a lookout.

The crews also have avoided bank properties, which likely would be considered federal offenses. The ATMs being targeted are privately owned.

Weitzel said Chicago police believe a number of the vehicles used to commit the burglaries were rental vehicles stolen from a Hertz business near Midway Airport in late October.

That heist was brazen. According to CBS Chicago, two Dodge Ram pickup trucks rammed their way through a security gate, allowing a number of people to enter and steal  8-10 vehicles from the lot.

I live in NW Indiana and am very interested in joining...

On: Chicago Hispanic Arts and...

The dumbing down of America continues. Good move RB....

On: RBHS school board votes to...

Thanks for insisting on more notice in the future. ...

Renovations to the Congress Park Metra station are...

Why, if the family's "reported" use of the fire pit...

On: Brookfield firefighters respond to...

Citizen Advocacy Center, a public interest not for...

I've known Bob McDermott for over 30 years and I think...

Great job, Brookfield! That looks so inviting at a...

Bob, congratulations on the retirement and...

Too bad John is leaving, he knows the ropes and is...