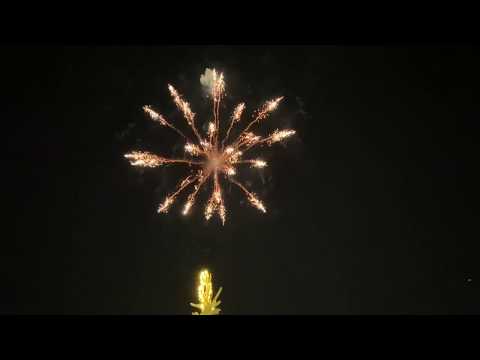 Buddy the Elf poses for a photos with young fans whose families escaped the cold for a few minutes inside the North Riverside Village Commons during the tree-lighting ceremony on Dec. 4. (Bob Uphues/Editor)

The fire pits set up outside the front of the North Riverside Village Commons were a popular spot for families looking for warmth while waiting for the fireworks during the tree-lighting ceremony on Dec. 4. (Bob Uphues/Editor)

The Grinch prowled the North Riverside Village Commons grounds during the tree-lighting ceremony on Dec. 4, demanding photos be taken with him. Dozens gladly obliged. (Bob Uphues/Editor)

Wearing holiday-inspired headgear, two women snap a selfie next to the fire pits in front of the North Riverside Village Commons during the tree-lighting ceremony on Dec. 4. (Bob Uphues/Editor)

Santa gets ready to flip the switch to light up the blue spruce in front of the North Riverside Village Commons -- and t5he night sky with fireworks -- during the tree-lighting ceremony on Dec. 4. (Bob Uphues/Editor)
< >
< >

North Riverside lit up a chilly, dark December sky on Wednesday, with hundreds gathering at the Village Commons for the 3rd Annual Tree Lighting event.

Families sipped hot chocolate and listened to seasonal tunes while mingling and snapping selfies near the three fire pits out front of the Village Commons, taking photos with visitors like the Grinch, Buddy the Elf and Santa, who wandered in and out.

The event capped off with a brief, but loud and colorful fireworks display high above Desplaines Avenue after Santa and a couple of helpers flipped the switch to light the blue spruce planted three years ago in front of the Village Commons to begin North Riverside's latest holiday tradition.

These TIF's hurt the local schools, who in turn...

On: Brookfield trustees vote to create...

Klas Restaurant in Cicero is permanently closed and...

Often no or few parking spaces are available on Grand...

On: Brookfield trustees vote to create...

Stop it, board members! Just stop. It's bad enough...

Buy mine at Sam's in Hodgkins for the last 2 years....

If it does not have parking I agree with Fred. The...

On: Daycare looks to locate on Ogden...

Lou treated the Maplewood Road families to a...