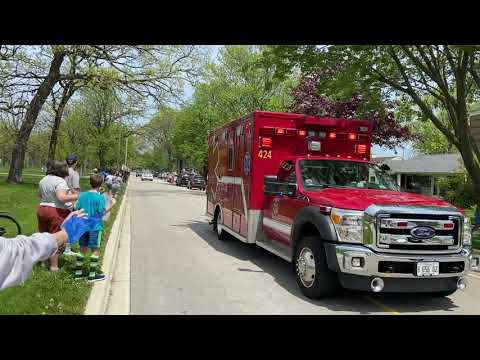 A caravan of police cars and fire engine start the parade for Maxx Kusper on May 16, at the corner of Washington and Arden Avenues in Brookfield. (Alex Rogals/Staff Photographer)

Residents line up on May 16, at the corner of Washington and Arden Avenues in Brookfield. (Alex Rogals/Staff Photographer)

Families line up as a parade goes by for Maxx Kusper on May 16, at the corner of Washington and Arden Avenues in Brookfield. (Alex Rogals/Staff Photographer)

Residents and neighbors fill the sidewalk while waving and cheering as Maxx Kusper is brought home on May 16, during a parade at the corner of Washington and Arden Avenues in Brookfield. (Alex Rogals/Staff Photographer)

A parade for Maxx Kusper goes around on May 16, at the corner of Washington and Arden Avenues in Brookfield. (Alex Rogals/Staff Photographer)
< >
< >

Less than two months after he was critically injured in an accident at the Prairie Avenue rail crossing on Brookfield, 11-year-old Maxx Kusper came home on May 16, and the event was celebrated in the most Brookfield way possible – with a parade.

Friends and well-wishers lined Washington, Arden and Brookfield avenues, holding #MaxxStrong signs and wearing their #MaxxStrong T-shirts, cheering and shouting encouragement as Maxx and his family drove by slowly in a white convertible from Riverside-Brookfield High School to their home.

Police and fire vehicles, their lights twirling, served as the parade's escort, swinging past Maxx's home away from home – Overholt Field at Kiwanis Park – where John Fogerty's song "Centerfield" played as the car drive past.

Afterward the family gathered on the front steps of their home for a group photo.

The homecoming was never a sure thing in those hours and days immediately following the accident. On March 28, Maxx left his home to go for a walk and in his haste to cross the tracks at Prairie Avenue, ran into the path of an Amtrak train.

While Maxx's left side has recovered more quickly, his right side took the brunt of the blow and his skull was fractured in several places. He underwent surgery to remove a portion of his skull to relieve pressure on his brain, and his right leg and arm suffered fractures as well.

"During those first dark days, it looked like we were going to lose him," said Maxx's mom, Marcey Raymond Kusper. "The thought of preparing our other kids for this loss was unbearable. His recovery has been nothing short of a miracle."

Through the first week of April, Maxx was in an induced coma but on April 6 he was taken off a ventilator and sedation. Since that time, his progress has been remarkable.

On April 13, just a week after regaining consciousness, Maxx was transferred to the Shirley Ryan Ability Lab in Chicago to begin intense rehabilitation.

Although Maxx needed to relearn a number of things, by the end of the first week of May he was able to walk and his energy levels had improved, but the experience was exhausting for both him and his parents.

"In the past five weeks Maxx has had to relearn a lot of daily activities we take for granted, but he has met each challenge like a true athlete," Marcey and Don Kusper wrote in an update on May 2 on a GoFundMe page set up after the accident to help fund Maxx's rehab.

"This week he is working on walking again. His broken pelvis, collar bones, elbow and knee are healing well but are definitely making this task a little harder for him. He's working with all his might to get through this."

On June 4, Maxx is scheduled for another delicate surgery. Surgeons will replace the portion of Maxx's skull that had be removed with a synthetic covering. He wears a plastic hockey helmet to protect his skull in the meantime. And, of course, therapy will continue for a long while into the future.

"He still has a long road of therapy and a second surgery, but we are just so happy to have our boy home," his mom said.

"In life's darkest moments, there have to be some positives. There are many positives that have come from this.  Maxx's accident has helped put life in perspective for us.  There are very few things in life that truly matter ... family, friends ... and, of course, the community that brings it all together. Raising our family in Brookfield has been one of the best decisions of our life."

What joy to have your son home! I was so very sad to learn of Maxx's accident. My son played Little League in Brookfield 10 years ago - I hung his old jersey in our front window with a big ?? and a #MAXXSTRONG sign. I am sure I speak for the whole community when I say "Welcome Home, Maxx! You are so very loved!" We decided to move to Brookfield to raise our family here 18 years ago. I feel so fortunate to be a part of this community.

I am all for solar savings but I also was informed...

On: Riverside Foods to install solar...

Kudos to Riverside Foods for taking this step towards...

On: Riverside Foods to install solar...

Sadly, many of these voters vote Republican because...

My husband was diagnosed with ALS in the summer of...

On: Fundraisers to collect money for...

@Maria, if you are going to call someone's...

On: Local congressional reps call for...

I noticed that Mrs Newman's name and photo was...

On: Local congressional reps call for...

Just to clarify my previous comment. I did find a...

On: After industry protest over fee,...

The Cook County covid response is unsatisfactory as...

I am a former member of Concordia, where the pastor...