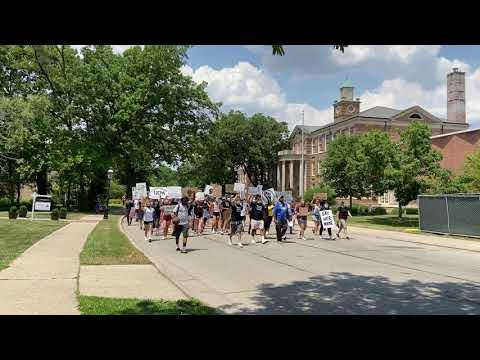 More than 100 people marched through North Riverside and Riverside on June 19, the latest in a series of demonstrations demanding racial justice and an end to police brutality against people of color in the wake of George Floyd's death in May. (Alex Rogals/Staff Photographer)
Demonstrators hold signs in support of Black Lives Matter and calling for change during their June 19 march through North Riverside and Riverside. (Alex Rogals/Staff Photographer)

Demonstrators kneel silently in Guthrie Park in Riverside in memory of George Floyd and other Black victims of police violence during the June 19 rally for racial justice. | Bob Uphues/Editor

More than 100 people head off from the North Riverside Police Department/Village Commons area to march against police brutality and for racial justice on June 19. | Bob Uphues/Editor

Riverside resident Emily Kowal reads the Emancipation Proclamation during the June 19 rally for racial justice in Guthrie Park. June 19 also mark's Juneteenth, a holiday commemorating the official end of the institution of slavery in the United States in 1865. | Bob Uphues/Editor

Residents stand outside of their home with signs in support of demonstrators on Friday, June 19, 2020, during a Black Lives Matter protest from North Riverside police department to Guthrie Park in Riverside. (Alex Rogals/Staff Photographer)

Demonstrators occupy the West side of the street and march towards Guthrie Park on Des Plaines Avenue on Friday, June 19, 2020, during a Black Lives Matter protest from North Riverside police department to Guthrie Park in Riverside. (Alex Rogals/Staff Photographer)

Protesters hold up signs and march together on Friday, June 19, 2020, during a Black Lives Matter protest from North Riverside police department to Guthrie Park in Riverside. (Alex Rogals/Staff Photographer)

Protesters hold up signs and march together on Friday, June 19, 2020, during a Black Lives Matter protest from North Riverside police department to Guthrie Park in Riverside. (Alex Rogals/Staff Photographer)

Police block off the streets and protesters march on Friday, June 19, 2020, during a Black Lives Matter protest from North Riverside police department to Guthrie Park in Riverside. (Alex Rogals/Staff Photographer)
< >
< >

It may not be an officially recognized holiday in Riverside, but the village marked Juneteenth – a holiday that marks the official end to the institution of slavery in the United States – for the first time on Friday afternoon.

Standing in Guthrie Park under an oak tree that may well have stood in that spot back in 1865, Riverside resident Emily Kowal, a recent graduate of Trinity High School, read out the Emancipation Proclamation to a crowd of more than 100, who had marched there from North Riverside to protest police brutality and demand racial equity and justice.

It might not have been the kind of Juneteenth celebration you might see in Texas, where General Gordon Granger of the Union Army landed at Galveston on June 19, 1865 to announce that the Civil War was over and that those who had been enslaved were now free, but it was notable in its own way.

"It felt like it was something important to be heard," said North Riverside resident Elizabeth Amaya, a 2019 graduate of Riverside-Brookfield High School who organized the march and demonstration. "That's what we were celebrating today."

Amaya said she took steps to organize the march after participating in one at Kiwanis Park in Brookfield and seeing others that were organized in Riverside and nearby communities.

"I asked myself, 'Why hasn't this happened in North Riverside?'" said Amaya, who just finished her freshman year studying sociology at DePaul University. "So I just kind of took the leap."

After posting her intentions on social media, others who had been involved in local demonstrations in the wake of the death of George Floyd, the Black man who died May 25 after a white Minneapolis police officer knelt on his neck for nearly nine minutes, reached out to her.

"We all started working together to put this thing together," Amaya said.

Among those who spoke to demonstrators both before and after the march, in addition to Amaya and Kowal, were recent RBHS graduates Anysiah Taylor, Devin Conrath, Shalah Russell and Seymone Russell as well as Brookfield resident Tony Williams.

Taylor spoke to demonstrators, who were mostly white, about the difficulty of growing up Black in a community with few other people of color and despite excelling in school as a student leader, scholar and athlete.

"I am just like you in all these aspects, but my Blackness, well that's not like you," said Taylor outside the North Riverside Police Department. "You fail to understand the scope of my devastation and suffering being in America.

"To America, its institutions, justice system and police officers, I am no scholar nor a community service leader. I am just a Black girl whose life can be taken out … whose body can be discarded like a carcass of roadkill."

Between 100 and 125 marchers walked down Desplaines Avenue from the North Riverside Police Department to Woodside Road and into downtown Riverside, where they crossed the tracks and ended in Guthrie Park.

Almost all in their teens or early 20s, and Amaya said they are working to make sure the positive, peaceful momentum seen nationwide since the end of May doesn't fizzle.

"Many of us, the youth of the community, are talking about what we can do in the future," Amaya said. "We don't want this to just die down. The big takeaway for me is that we are demonstrating to the community, that even though we don't see this [kind of police brutality] in our community, that doesn't mean we shouldn't be fighting [against] it."

The group's GoFundMe page can be found by cllciking here.

Ms. Amaya, thank you for your interest in making the world a better place. Please consider these questions: If you don't see this type of police brutality in your community should you not question the narrative that there is rampant police brutality everywhere? If there is police brutality in other areas of the United States, where are most of the interactions taking place? How many police forces throughout the US are headed by people of color? Are Black, Hispanic and Asian police officers racist towards their own race? Who controls the police force? If there is "systemic" racism then who sets those policies? Perhaps we should consider defunding the politicians? Is the race based Marxism being taught at Riverside Brookfield High School systemically racist? One additional question: Is hiring people based on their skin color racist? Do we still believe that Dr. Martin Luther King, Jr's "I Have A Dream '' speech is still applicable for our country? This statement in particular: "I have a dream that my four little children will one day live in a nation where they will not be judged by the color of their skin but by the content of their character." Dr. King's "Letter From A Birmingham Jail" should be required reading in all our high schools. The true tragedy is that since 1973, more than 20 million black lives have been exterminated by abortion. Planned Parenthood was started as a racist, eugenicist organization. Margaret Sanger spoke to the KKK and was a big hit with the organization. Planned Parenthood is run by white upper class suburban women. 40% of all abortions are of black Americans even though blacks make up only 14 percent of the population. That is genocide. Peace and God bless you, Michael Flight

I applaud this group's right to peacefully protest and I will support their right, even though I completely disagree with many of the assertions reported and attributed to the participants in this article. Ms. Taylor, I am greatly saddened that you feel you are suffering in America. It pains me that a talented, gifted, hard working person of any color, but especially an individual like you, in the prime of their life, has been so indoctrinated with lies and fear. Whoever has been educating you has inflicted you with an evil ideology and has taught you that you are a victim. They have literally enslaved you with fear and hate. Ms. Taylor, I will make a personal commitment to you instead of mouthing platitudes. If you do get wrongfully entangled in the justice system, I personally will commit my honor, resources and network to extricate you. Go live your life in peace. You can do great things. Go make the world a positive and flourishing place. Don't let hate, fear and victimhood destroy your life. I do agree that the justice system in America is broken, but the dividing line is not along race but rather along power and wealth. If you are a politician, celebrity or have enough money, you can escape justice. If you are poor or middle class or a regular property owner with no connections or clout there is very little justice. Peace be with you, Michael Flight

Sophia Marhoul My error in making the calculation. ...

Mr. Hickey - Your initial numbers are correct, but the...

Personally , I was pleased to see North Riverside...

Ms. Malacina your comments are completely false! The...

The subject of zoo visitors coming into Brookfield has...

Has the County considered the increased air pollution...

When was last Ogden Ave study completed, and did this...

Yes. . we all want school back to normal. Parents want...

The article following this one in the Landmark...

See you on the other side of this easily-avoidable...