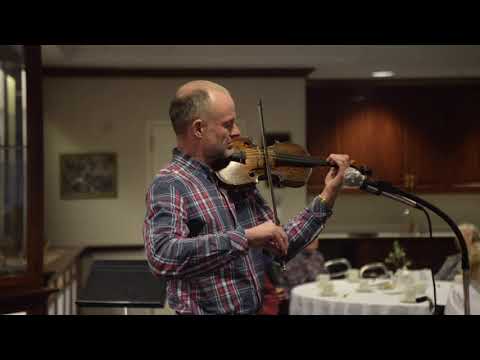 David Hopes the head of collections and interiors for the National Trust for Scotland, talks about the history of the Gregg Violin during a special concert at Caledonia Senior Living and Living Care in North Riverside on Jan. 29. (Alex Rogals | Staff Photographer)

Alistair McCulloch plays a tune on the 267-year-old Gregg Violin, one of Scotland's national treasures, believed to have been played by that nation's national bard, Robert Burns, during a special concert at Caledonia Senior Living in North Riverside on Jan. 29. (Alex Rogals | Staff Photographer)

Residents at Caledonia Senior Living and Memory Care in North Riverside got a brush with Scottish history last week when it became a special stop during a three-week tour of one of Scotland's national treasures – the so-called Robert Burns violin.

The 267-year-old instrument is known as the "Gregg Violin," named after William Gregg, dancing master of the Bachelors Club in Tarbolton, where Scotland's national poet began his career. Burns, who died in 1796, is said to have played the violin, and it normally is displayed under glass at the Burns Birthplace Museum in Alloway, Scotland.

The U.S. tour began in mid-January and made stops in Chicago, Boston, Los Angeles and Washington, D.C. After making its tour around the country, the violin – along with fiddler Alistair McCulloch, the only man allowed to play it – made a special visit to the Scottish Home on the Caledonia Senior Living campus on Jan. 29.

In addition to McCulloch performing on the violin, residents got to hear about the history of the violin from David Hopes, head of collections for the National Trust of Scotland, which owns the violin.

Hopes, the former curator of the Robert Burns Museum in Ayrshire, is the leading authority on Burns, known as Scotland's National Bard. The poet and lyricist was the author of "Auld Lang Syne" and "Tam O'Shanter."

Residents at Caledonia Senior Living got to hear "Auld Lang Syne" and others played by McCulloch, who also asked for requests. One of those came from Caledonia's president Gus Noble, who requested "John Anderson, My Jo," a song about love surviving through time.

It's just the second time the violin has crossed the Atlantic and the first time it's traveled anywhere outside of New York. Noble said he first saw and heard the fiddle played on the tour's first night on Jan. 18 at the University Club in Chicago.

"I felt an immediate connection to Burns, that time and the context of his life," said Noble. "It was such a powerful feeling."

McCulloch gave him a private rendition of Burns' song "Love Is Like a Red, Red Rose," which left Noble in tears.

"Scots are known for their stoicism, but I was at the back of the line when they were handing out stoicism," Noble said. "I started bubbling like a baby."

What little, that I "learned", about Social...

On: Education bill to revamp social...

The problem is that facts are frequently discarded...

The hypocrisy and lack of self-awareness these days is...

@Matt Leuck I'm afraid it is much more complicated...

My Florida friends over 65 have all been vaccinated at...

Jan is going by the left's playbook: She wants to...